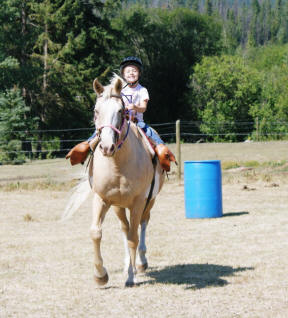 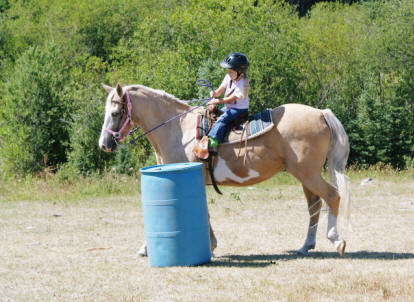 Ellie and Cay practicing their barrels at home in August 2010.  I think both enjoy it!

Cay is the sweetest kids horse, and Ellie’s true joy, now Trace gets to enjoy her too. 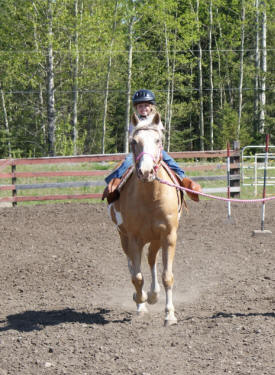 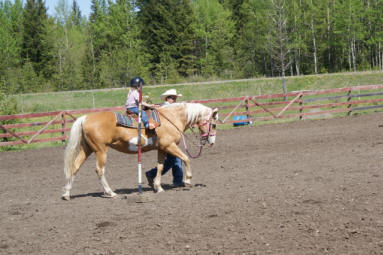 I just love the smile on Ellie’s face, she was in the saddle all day long and loved it.  Ellie being led around by Daddy at our 4H Horse Club Barrel Racing and Pole Bending Clinic. 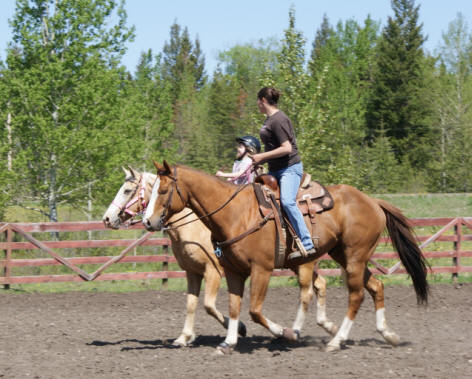 Ellie being led by cousin Kirsty and her horse Mountain at the 4H Barrel Racing Pole Bending Clinic in May 2009.  You can see Ellie is laughing and smiling and just loving it all. 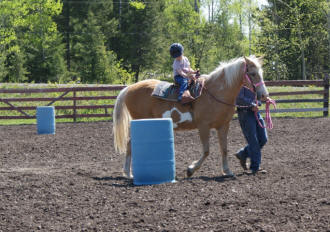 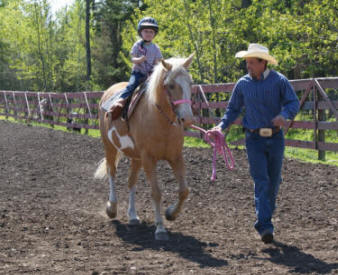 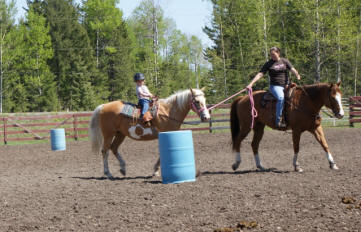 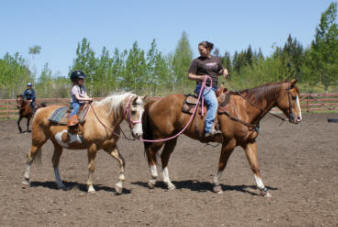 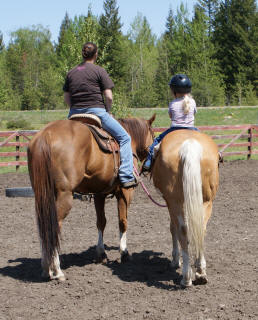 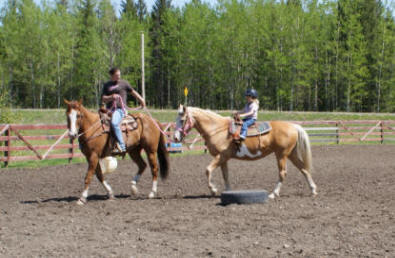 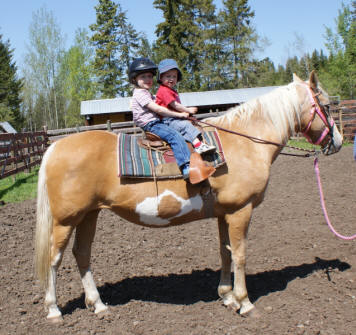 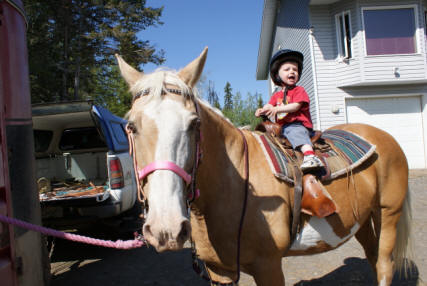 Trace riding Cay by himself. 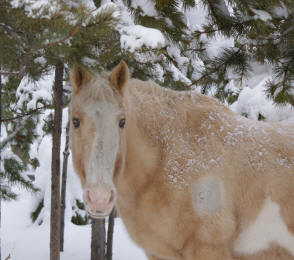 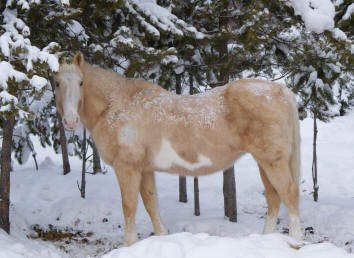 Cay hiding in the trees January 2009, you can see her freeze brand starting to come in. 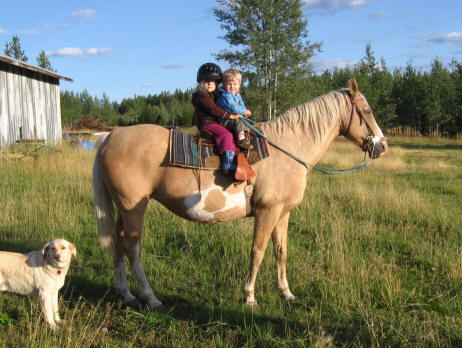 Ellie and Trace riding Cay September 2008.  And good ol’ Jake right there with them, may he watch over them from above. 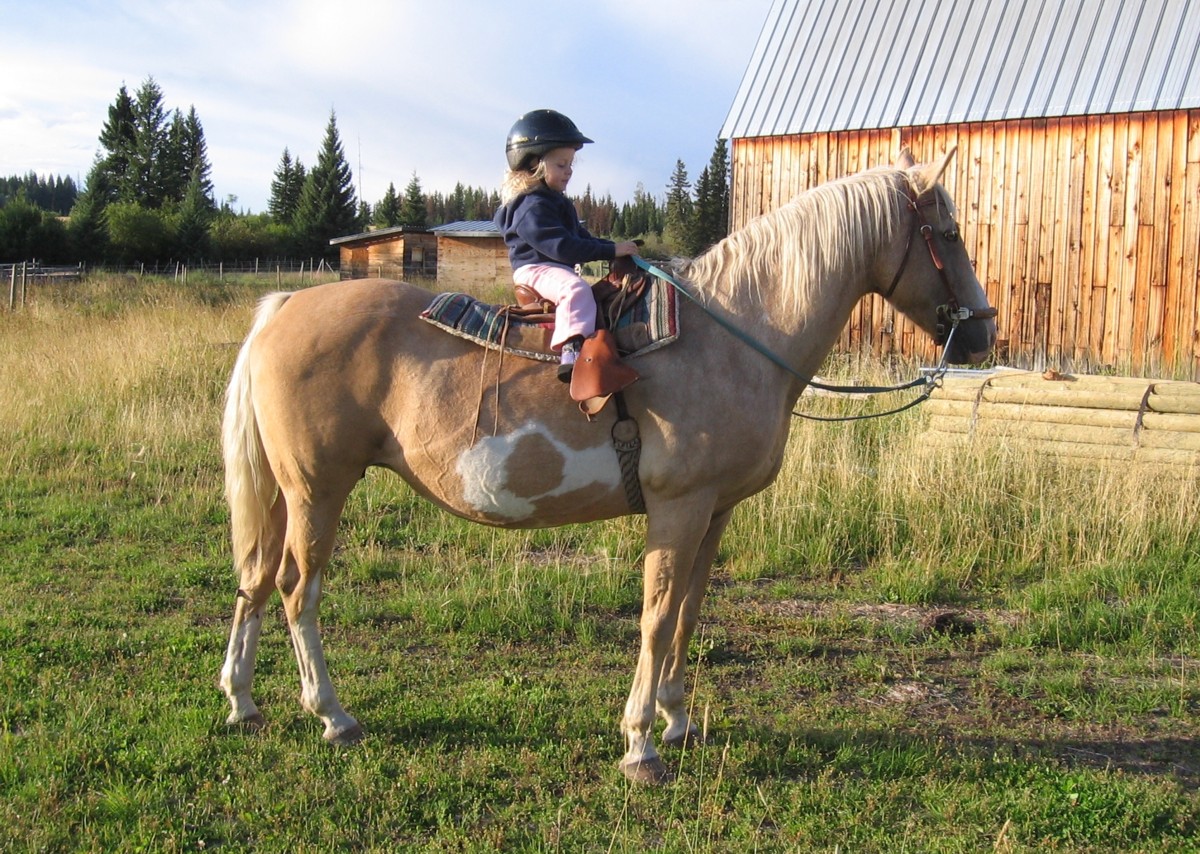 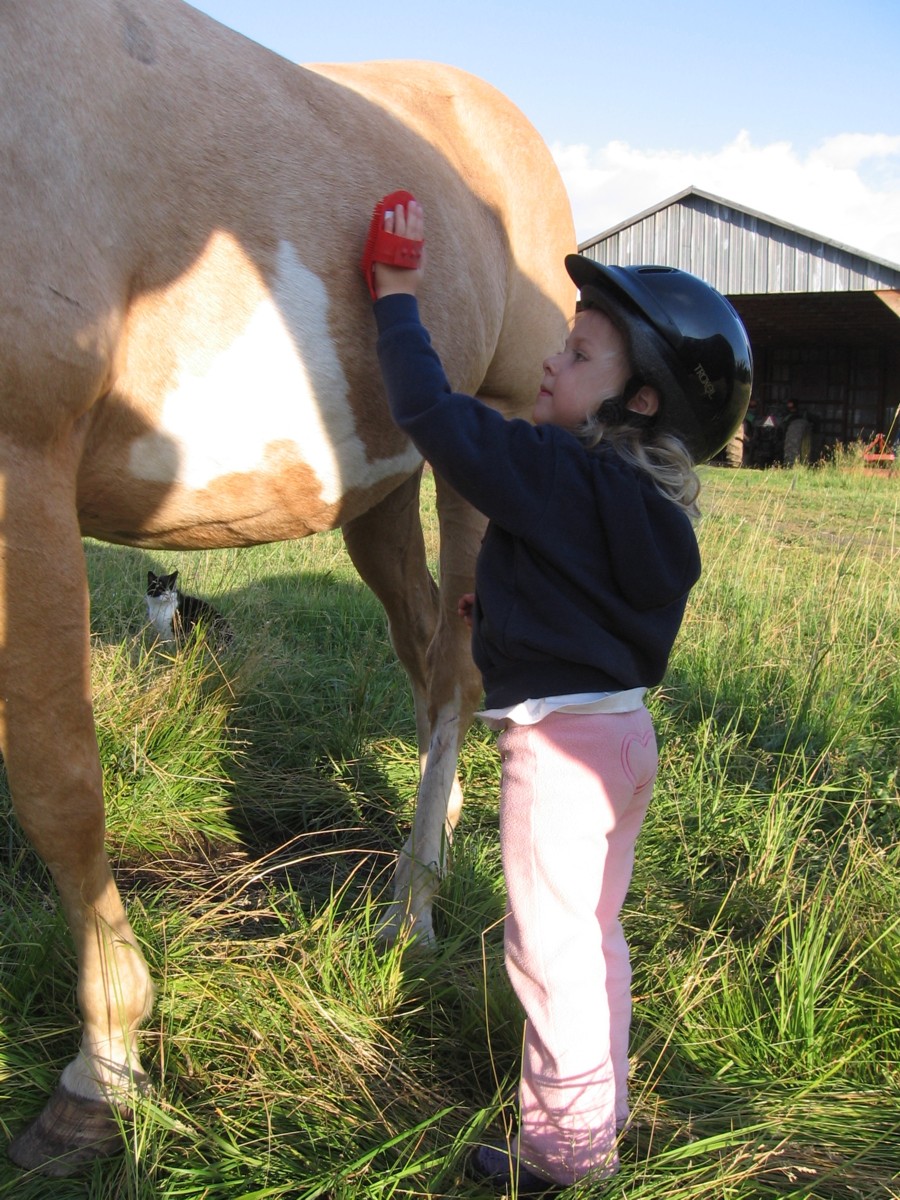 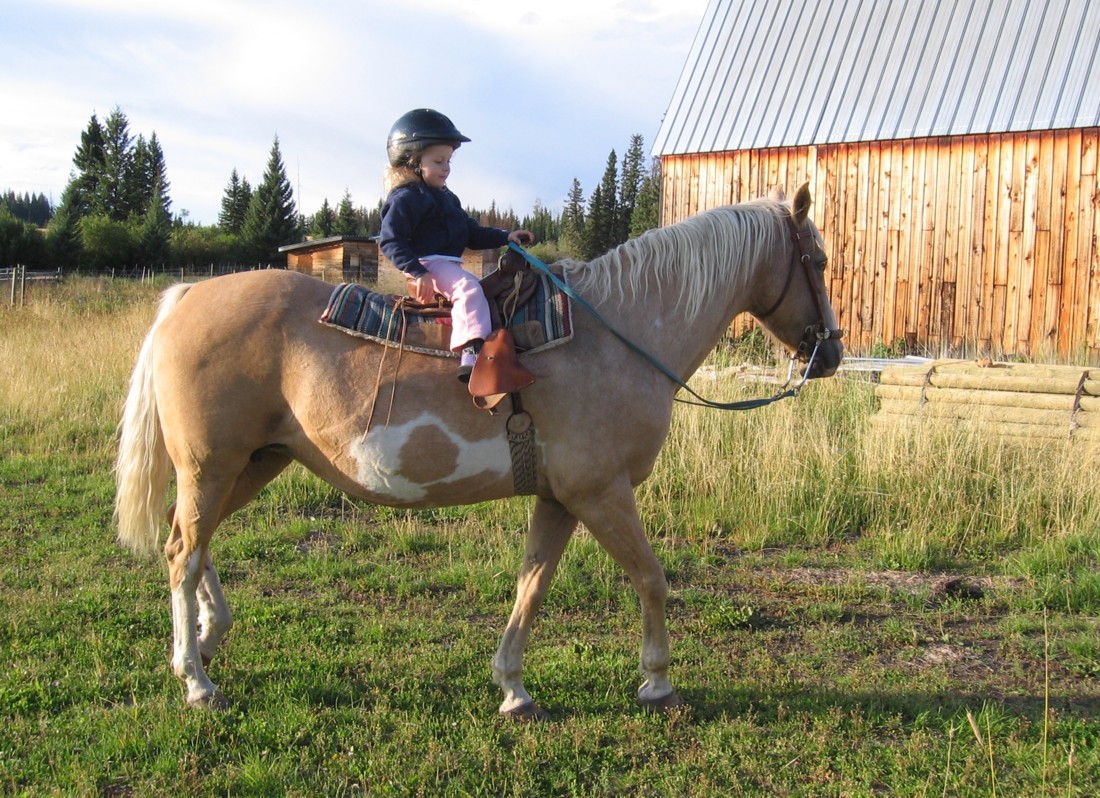 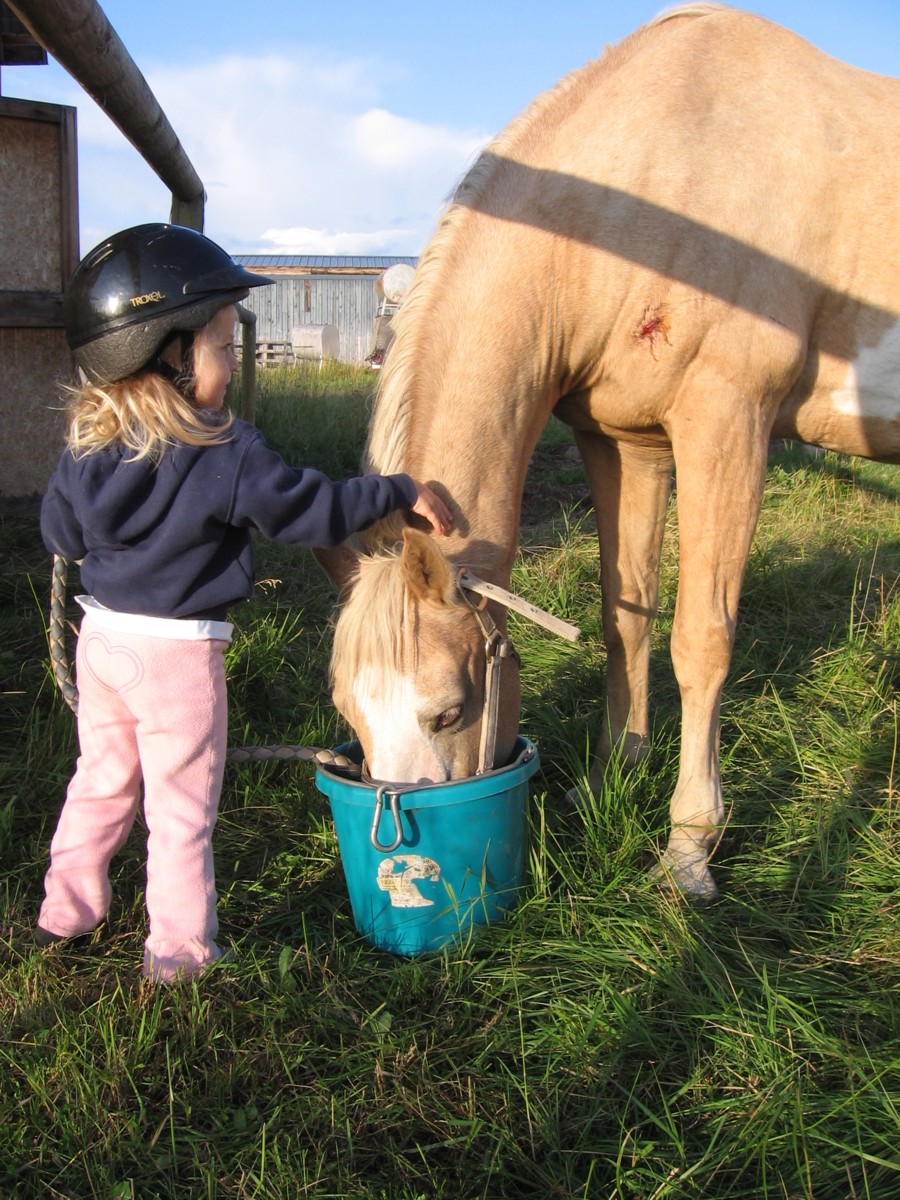 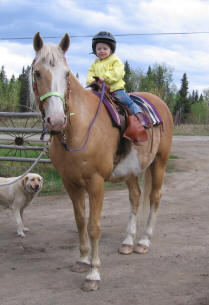 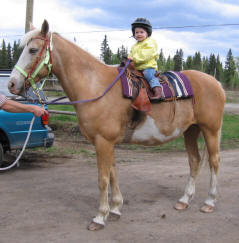 Cay and Ellie riding in May 2007.  Ellie just loves to ride her and Cay enjoys the easy life of a kids horse. 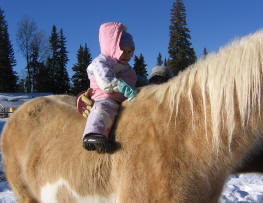 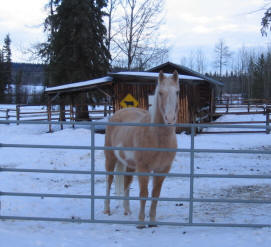 Cay (short for Cayenne) joined our herd on January 1, 2007.  A nice beginning to a new year.  She is an older grade paint mare that we got as a partial trade on our 2006 weanling filly Satin.  Cay was previously owned by Dana Halliday.  She is showing her years now but sure has alot of life left in her.  She is our daughter Ellie’s riding horse and hopefully now she will share her with Trace.

Cay will live out the rest of her life here at Colour V Ranch with us.

She had a big healthy filly.  Looks to be dark bay right now and the only white is a star on her forehead.  She is a nice looking filly, we are not sure if she’ll be for sale or not.  See below for some pictures.

Cay wasn’t supposed to get bred, but early last year she backed up to the fence and got bred by Kid.  We figured with her age and only being bred once, she wouldn’t catch. 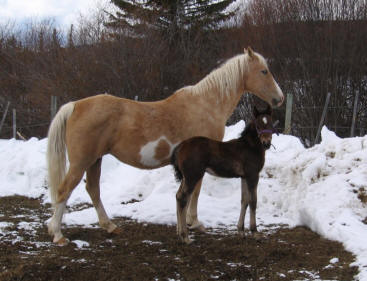 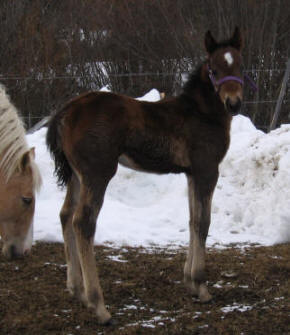 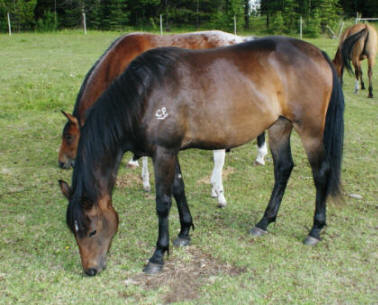 Now owned by Christine Proulx of Hope, BC