Parti is bred to our rare grullo champagne AQHA stallion “My Beau Vanzi” for an exceptional foal in 2013.

Parti completely surprised us this year and had her first loud coloured overo foal, out of a QH stallion.  She had a beautiful dun overo filly out of Dunit In Boomtown. Parti out produces herself every year.  We are keeping this filly, she is just exceptional! 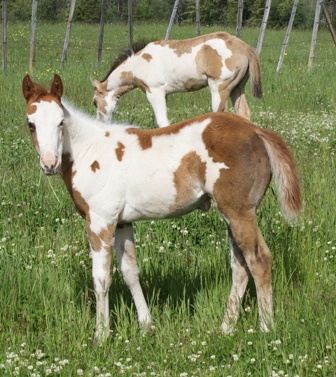 A picture of Ariel (Parti’s granddaughter) and Aquila (Parti’s 2012 filly) in the back.  What a great line of horses these are.

This mare’s bloodlines are packed with champions in Racing, Halter, Cutting, and Performance, her sire was also a money earning cutting horse.  She raises exceptional foals with good bone, conformation, athleticism, and minds.  She is an easy going mare, and all her babies have been easy going and easy to train. 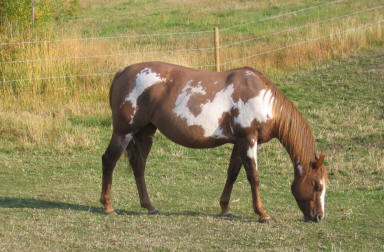 Parti joined us in October, 2001 and was our first broodmare.  We couldn’t have asked for a better mare.  She is super quiet and easy to work with. 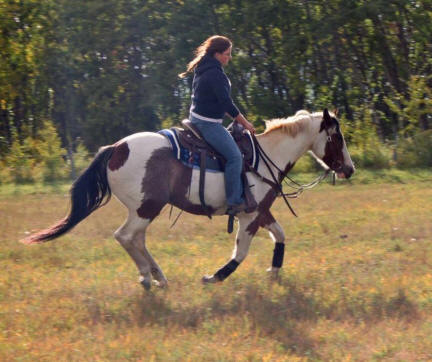 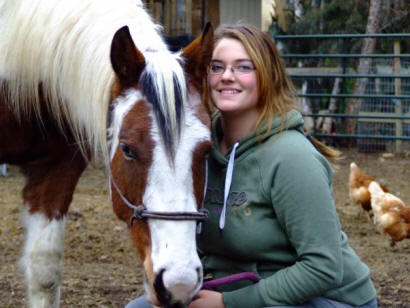 Mel riding Steel (CV Docs Dashin Steel, son of our mare Parti, and full brother to our mare Hattie) in 2011.  Here is what Mel has to say about Steel, as a 4 year old gelding: “He has unbelievable temperament. Honestly he is by far the best tempered and easy going horse ever! I was sitting on him bareback a few days ago and about 20 horses ran across the hay field behind us goofin off and being silly and he didn’t even bat an eye. I thought for sure I was going to get dumped. I am definitely going to purchase from you guys again!”  Thanks Mel, you guys are a great team!

Parti stands just 14.1hh but is a consistent producer of big horses, usually around 15.3hh.  (she threw a 16hh colt out of our palomino stud Nifty TC, who is only 15.1hh).  She is small, smart, quick and bred to work cows.  Unfortunately she broke her neck as a weanling and can not be ridden. 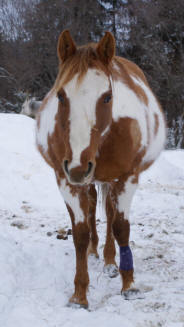 After foaling with her 2008 filly Hattie Parti had some complications, but healed fined.  The result though was that she lost her eye sight in her right eye.  She has adjusted well and it’s hard to tell she can’t see on that side.  She still makes a perfect mother though. 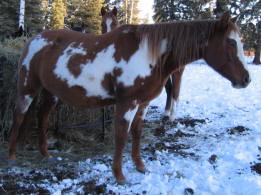 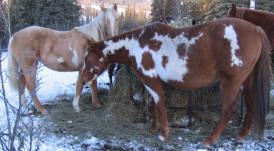 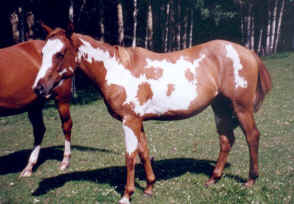 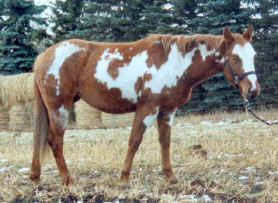 She raises nice big foals with strong, defined hips, straight legs and great dispositions.  Check out her foals at the bottom of this page.

Myrtle Dee (She was a sprinter and her short distance excellence earned the admiration of all who saw her –including the man (Jack Goode) who would later buy her in foal to Percentage. She held the 5 1/2 furlong track record at the old Coney Island track in Cincinnati.)

Here’s Parti’s Foals of the Past: 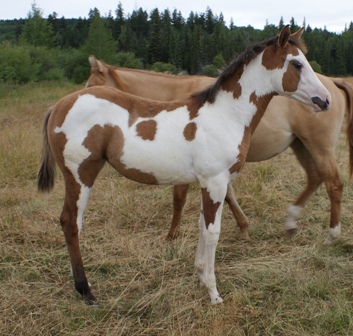 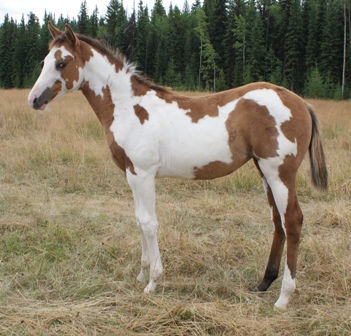 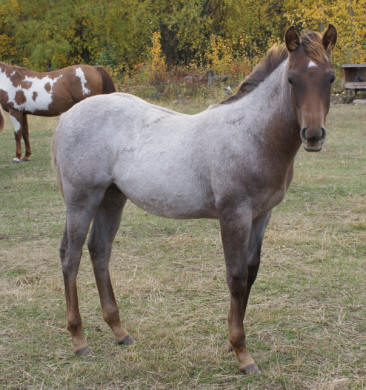 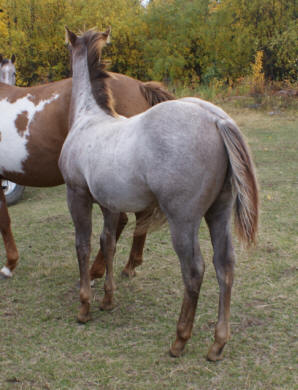 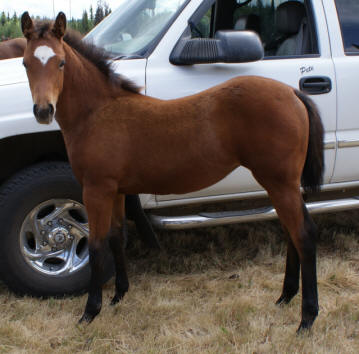 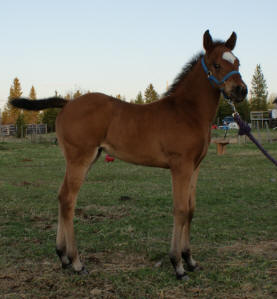 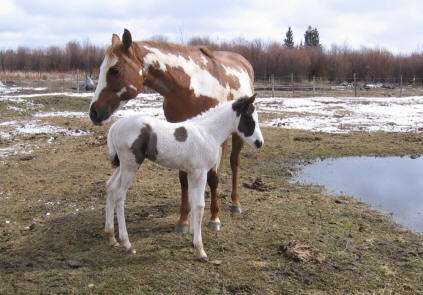 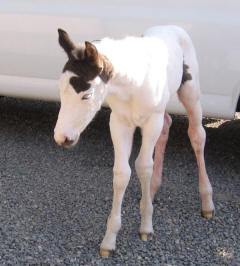 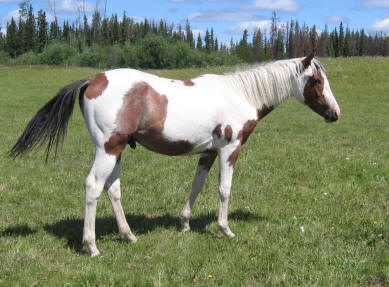 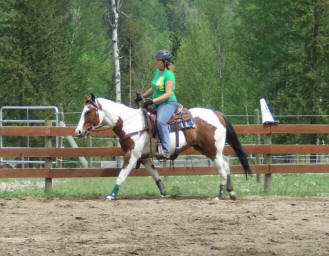 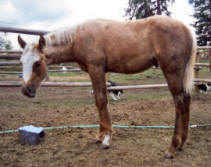 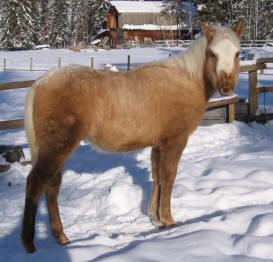 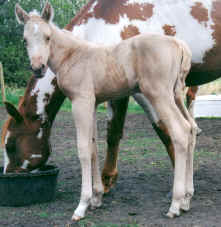 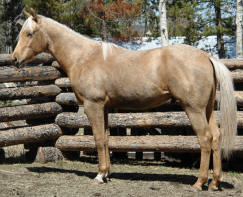 Here is an updated picture of “Poncho”, formerly Moose.  His new owner sent this picture of him as a 2 year old, he is gorgeous! and he stands about 15.3hh already. He is taking his training very well and is easy to work with. 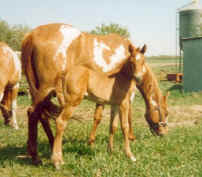 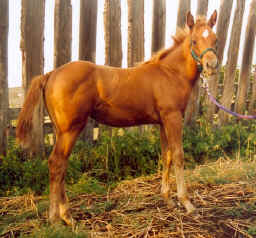 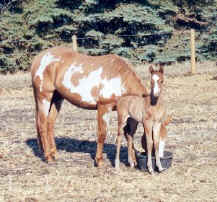 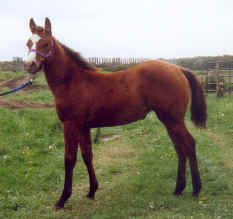 (sired by a black Quarter Horse)